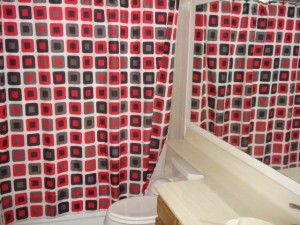 This shower curtain allegedly caused 9 year old Jimmy Heffernen to have a massive seizure which 'scared the bejesus' out of his family.

Aurora, Kansas:  When Misty Heffernen brought home the new shower curtain, she thought it would go well with the decor in the bathroom.  She didn’t expect the reception she received however as the decorative addition turned her whole life upside down.

“First thing you know, ” Heffernen recounted recently, “I put the shower curtain up and the dog came in and yacked all over the whole floor.  He almost never does that!”

If that had been the end of the curtain-related problems things would have probably worked out eventually, but the next event shook the entire Heffernen family to their core.

“My son Jimmy comes into the bathroom and just freezes.  Then, before we even knew what was going on, he just fell to the floor and started flopping around like a carp.”

Medical testing indicated that young Jimmy Heffernen had had a massive seizure which was, in the opinion of his doctors, brought on by the shower curtain.

“There is very little else we can pin this on.”  Dr. John Stooge said of the frightening seizure.  “I mean, that was one hideous shower curtain.  Even for a trailer!

At the insistence of her extended family, Misty Heffernen, a single mother of four, has brought suit against the home fashion store where she bought the shower curtain.  The court papers obtained exclusively by Ambienista.com claim that the store, Krazy Kraft and Kurtain, should have known better than to sell such a hideous bathroom curtain.

“Who is going to protect us?”  Heffernen said tearfully Monday from outside the courthouse in Aurora.  “When we innocently go into a store to buy something, we expect that store to take some responsibility for what they sell.  They’re the experts in home decorating.  They should have stopped me from making such a huge mistake.  My bathroom is white and beige for God sake!”

Attorney Keven Kerry, representing Krazy Kraft and Kurtain, did not return our calls for comment.

This entry was posted on Saturday, August 29th, 2009 at 21:39 and is filed under News. You can follow any responses to this entry through the RSS 2.0 feed. You can leave a response, or trackback from your own site.