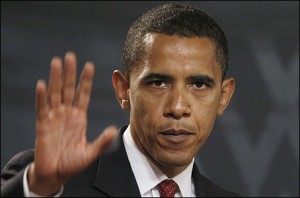 An angry President Obama says "STOP" to the press

It started as a joke at the regular press corp open house meetings hosted by President Barack Obama.  When the Commander-in-Chief entered the room, the press would stand and the quiet crooning would begin: “Bama Bama O-Bama, Banana-fana Fo-Fama, Fee-fi Mo-Mamma… Obama.”  Seemed simple enough at first, and a good time seemed to be had by all, but last Friday’s meeting turned out to be the last sing-along as the President insisted, angrily that he had had enough and never really liked the singing in the first place.

“We were surprised.”  Said Andrew Wanker of the Columbus Daily News.  “He always seemed to have a sense of humor, but suddenly he just snapped.”  The disappointment was shared by most.  “It’s a silly song,” Said Wanker.  “But it was hella fun to sing all together!”

This entry was posted on Thursday, August 27th, 2009 at 21:49 and is filed under News. You can follow any responses to this entry through the RSS 2.0 feed. You can leave a response, or trackback from your own site.