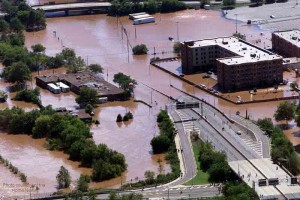 When Watson homeowner Rob Robbins discovered a couple inches of water had evaporated from his pool, he decided it would be a good idea to add some fresh H2O so that he wouldn’t run the risk of drylocking his skimmer and pump system.  While it started off as an innocent enough end-of-the-day chore, the swimming pool top-off turned into a city-wide emergency.  Robbins apparently fell asleep a few minutes after turning on the hose and didn’t wake up until some eleven hours later as local emergency crews tried frantically to get him out of his house and to higher ground.

“I sleep kind of sound.”  Robbins said in an interview at the emergency shelter station set up at the Watson High School.  “My first thought when I came to was, the people upstairs are having a hell of a party and I pissed the bed — really bad.   But then I remembered I live alone in a one story home and, sitting up, I was almost waist deep in water!”

Emergency crews, using chainsaws to get to Robbins through the roof of his home, managed to rescue the goggle-eyed homeowner without injury.   As a matter of fact, at post time there were no reports of injuries associated with the pool-filling flood, even though nearly one quarter of the neighborhood, including one elementary school and the main arterial in and out of town, were completely underwater.

“My home has hellacious water pressure,” Robbins recounted.  “I should have known better than to just leave the hose in the pool.”

The cost of this accident could easily reach the million dollar mark, but Mr. Robbins isn’t worried about that so much.  “I am an insurance broker.  I believe you can never have too much insurance… but I’m not looking forward to my water bill.”

This entry was posted on Wednesday, August 19th, 2009 at 21:27 and is filed under News. You can follow any responses to this entry through the RSS 2.0 feed. You can leave a response, or trackback from your own site.