Klan Outfits for New Millennium Not Catching On 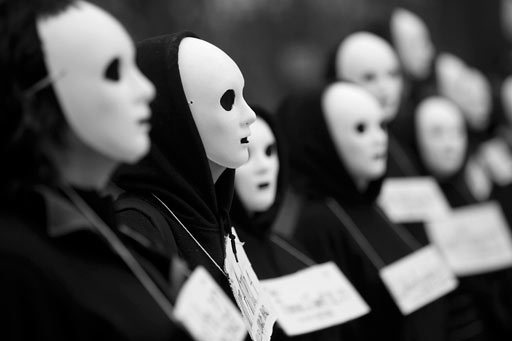 The most popular new Ku Klux Klan ensemble, unveiled last year at the super-secret Klanorama event in Bent Bow, Ark, is not winning kudos from the rank and file. Complaints of excessive heat and a very low melting point make for a dubious future for the latest racist fashion statement.

Bent Bow, ARK:  The most coveted feature of last year’s super secret Klanorama event was the unveiling of several new fashion ensembles that would potentially replace the long used and often maligned white sheet and hood that has been the mainstay of the Klan for the last two hundred years.  Attending members were able to vote for their favorite combo and the “Full Moon/Dark Night” design won out over all the others.

Well that was in the excitement of the Klanorama event.  Once the new uniform ensemble began its distribution to the rank and file, the euphoria quickly gave way to doubt and even open dislike by some, more vocal members.

“We don’t ken it!” Bubba Blombkin, sergeant at arms in the Bent Bow district was heard repeating again and again to anyone who would listen.  “It ain’t what we want.  It  ain’t like we need to be able to carry out our service to the Lord.  And it just ain’t comfable at all!  Instead of a full moon on the Dark Sky we look like Casper the friendly Fuckin’ Ghost.  That’s entertainment, kids.  We ain’t lookin’ to entertain!”

Truly enough, the Klan, or KKK as they’re commonly referred to, are much happier when they are intimidating minorities, burnging crosses and just breaking down race relations in general.  The outfits, while often making the klansmen more difficult to see in certain situation, are not helping to instill the kind of intimidation factor the Klan is looking for.

“We look like a bunch-a pussies now.”   Larry-John McSanderShot commented.  “We ain’t gonna scare nobody, except maybe white kids and old ladies.  We really might-a gotten ourselves pointed in the wrong direction on this one.  We sweat like a waterfall comin’ down our necks… and BOY HOWDY!  If a Klan Brother gets his face too close to the cross as he’s lightin’ it up… well he’s liable to be wearin that plastic mask material melted into his hide for the rest a his life.  I mean, I’m all for white power, but not THAT white.

This entry was posted on Wednesday, August 19th, 2009 at 22:03 and is filed under News. You can follow any responses to this entry through the RSS 2.0 feed. You can leave a response, or trackback from your own site.