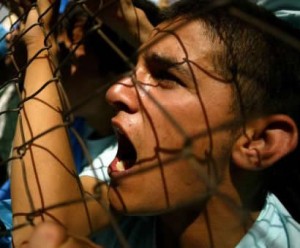 The crew of an unnamed Egyptian trawler ended the Israeli mermaid controversy Monday as they pulled not a mermaid, but a merman from the inky depths off the coast of Kiryat Yam. The merman, pictured here, struggled valiently in the trawler's net, but was hopelessly entangled and unable to breath the common air. The beach crowds, primarily male, mostly lost interest.

Kiryat Yam: The beaches of this popular Israeli beach town were mostly empty Tuesday after news spread that the mermaid contro- versy gripping the area for the last week had finally come to an end.  To the surprise of many, the urban legend- to-be turned out to be for real, almost.  As it turs out, the multiple sightings of a mermaid over the past week were not a mermaid at all, but a merman.  An Egyptian trawler, fishing just inside international waters on Monday pulled what they originally thought to be “a tuna with a man sticking out of its mouth” from its nets, only to discover the cause of all the commotion on the shores just beyond the horizon in Kiryat Yam.

“At first we said, ‘we will throw him back, for it must be bad luck to net a merman,'” Ali Jhanati, captain of the unnamed trawler commented in port late Monday.  “But then the deck hand, he is a very spiritual man with some background in idolotry and folklore, he say ‘no, Boss! Here there be much money!’  But the merman, he could not survive out of water for long, so we did the only honorable thing.

Very little evidence other than one picture remains of the captured merman.  One deck hand commented anonymously, “They taste like chicken.”

Meanwhile back in Kiryat Yam, the news of the merman capture spread fast, causing a massive, but orderly departure from the seaside resort.  One exiting man, also speaking on the condition of anonymity was quoted as saying “We got Splash in Israel.  We know the story, the beauty of Daryl Hannah and the wonders that could be found in the discovery of a mermaid on our very shores.  But a merman?  Pleh!!”

This entry was posted on Tuesday, August 18th, 2009 at 22:24 and is filed under News. You can follow any responses to this entry through the RSS 2.0 feed. You can leave a response, or trackback from your own site.