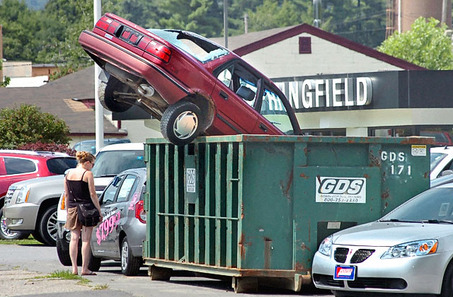 SPRINGFIELD:  Avoiding disposition fees which can erase upwards of ten to fifteen perceont of the dealer’s recouped cost in the Federal Cash For Clunkers progam, some car dealers are willing to go to any length to cut corners and keep their bottom line green — even if the planet doesn’t become more green in the process.  The dealers, it would seem are just putting the vehicles anywhere they can to avoid having to bring them to a landfill or crushing service, a step clearly set up in the program for disposal of the older, less fuel-efficient autos.

“I woke up the other morning and there was a man in  my basement with a welding mask and a cutting torch.”  84 year-0ld Helga Sapperstein remarked.  “But it turned out theweren’t stealing my copper pipes like last time.  Oh no, they was cutting up cars and stacking up the parts in front of my washer and dryer in the corner of my cellar.”  Shaking her head and waving the smell of burnt metal from her face, Sapperstein appeared beaten.  “I’ll have to open four Suburban doors and the hood off a car I don’t even recognize just to get my clothes in the wash!”

Elsewhere in town, business owners came to work this week with their privately owned and leased dumpsters filled to capacity and beyond with partial – – and in some cases full blown — automobiles.  While there were no witnesses to the sneaky disposition of vehicles, they all appeared to come from Mc Callum Ford on Frontier Street.  Owner John McCallum commented, “I don’t know what you’re talking about.”  When asked to elaborate, McCallum opted not to, instead putting this reporter in a nice, gently used 1988 Grenada.  All I have to do is get it off the roof of the insurance building.  And that, of course, will be part two of this hard-hitting investigative report.

This entry was posted on Monday, August 17th, 2009 at 22:31 and is filed under News. You can follow any responses to this entry through the RSS 2.0 feed. You can leave a response, or trackback from your own site.